Faint Line on a Home Pregnancy Test: What Does it Mean? There’s no one-size-fits-all answer when it comes to trying to conceive.

The fertility journey can be daunting, and it can take a while to get pregnant.

Relax and be patient – especially when it comes to checking and re-checking the lines on your home test kit.

Trying to conceive: What you should know

Conception is a small miracle, and to some, a matter of chance.

Trying to conceive brings out emotions you didn’t know you had. At times, it seems unfair just how easy trying to conceive was for other women. This gets even truer when lots of people you know have an easy time of it.

Some get lucky and fall pregnant at the first attempt, while others will still be trying a year or more later. You and your partner have done the best, read wide, researched and took the best care of both your health. But after that, other than stockpiling your bathroom cabinets with pregnancy test kits, it’s very much out of your hands.

Eager parents-to-be are rather impatient when it comes to checking and rechecking whether or not they have good news for share. The wait can get even more anxious when you have to squint those eyes on a faint line that surfaced on a pregnancy test.

What a faint line means

When you test early, as early as one day after a missed period, a sensitive pregnancy test will likely give you only a faint line for a positive.

Every pregnancy test is different. Some people have a noticeable firm line when they take a pregnancy test, while others notice more of a faint positive line. This is particularly true in early pregnancy when hCG (human chorionic gonadotropin) levels are much lower. hCG is a hormone that your body produces during pregnancy. In early pregnancy, the detectable levels of hCG should double roughly every two days.

For best accuracy, plan to take the test with your first morning urine. First morning pee will have a higher amount of hCG in it than pee from later in the day. The more you drink, the more diluted the hCG in your urine will become. Frequent urination excretes hCG from your body.

If there’s no line or positive result, it doesn’t necessarily mean you’re not pregnant. Though that may be a possibility too. You’ll want to test again a few weeks later to see if the faint line has become thicker and darker. If it has, your pregnancy is progressing and you can safely start getting excited.

Other notable reasons for a faint line on a pregnancy test is possibly that the kit has expired or that the test has sat beyond its stipulated time after use. An evaporation line will appear and your result will become inaccurate.

Getting the most accurate results

Alternatively, you may use a digital pregnancy test kit next if you get a faint line. These kits are the ones that have a little screen that says “Pregnant” or “Not Pregnant.” They are almost as sensitive as the line tests, but more expensive. They may be more worth it for the certainty and are essential for calling it a celebration.

However, your best bet is always to visit a doctor to have your result confirmed by a blood test. Its accuracy is near 100 percent.

All the best to all couples who are trying to conceive – here’s to hoping for a positive pregnancy test soon!

Foods To Eat To Conceive A Baby Boy

Foods To Eat To Conceive a Baby Girl 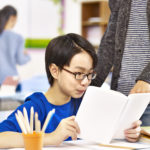 Group Tuition vs Private Tutor – What is Right for Your Child?