Foods To Eat To Conceive A Baby Boy Most parents are happy with babies of any gender, but you may have a personal reason or a preference for a baby of one gender over another.

Scientifically, it has been proven that the father controls a baby’s gender by contributing either Y-chromosomes or X-chromosomes to add to the X-chromosome in the mother’s egg, but some studies seems to confirm traditional beliefs that your diet of can play a part in defining the gender of your baby.

Male producing sperm thrive in alkaline environments. As such, it is believed that mothers-to-be should consume alkalescent foods to create a more alkaline vaginal environment for the male sperm. On the other hand, according to Shettles’ theory, which is not scientifically backed although it appears to have been proven to be efficient, the father-to-be is encouraged to drink more coffee or energy drinks as caffeine is known to give the boy sperm a push.

In a survey of 740 pregnant women where detailed records of diets before and during pregnancy were analysed, it was found that the single food with most impact on the birth of a boy is breakfast cereal. 59% of those who ate cereal daily had boys compared 43% who bore boys in the group that ate less than a bowlful of cereal per week.

From the study, it appears that mothers who eat foods high in a wider range of nutrients, including potassium, calcium, vitamins C, E and B12, as well as sodium, tended to give birth to baby boys.

Mothers who maintain a high calorie, high sugar diet also had a higher occurrence of having boys as compared to those with a low energy intake. This result is echoed in animals such as horses and cows as well – statistically, they are more likely to bear males if well-fed.

One tip is to fulfil a baby boy diet is to have frequent meals to keep the glucose and calorie levels high. Other than that, mothers-to-be looking to consume foods to conceive a baby boy can increase their intake of the following foods.

Breakfast cereals are often fortified with potassium and vitamins that fulfill a baby boy diet. Plus, the sugared versions can add to the mother’s glucose levels as well.

Bananas are an athlete staple. They are packed with high levels of potassium, vitamin B6 and fiber to support a baby boy diet. Tip: add bananas to your breakfast cereal for an additional boast.

This fruit contains a high amount of calories and fats on top of nutrients such as potassium and vitamins B, A and C, all conducive for conceiving a baby boy.

Pickles may be able to help you ease morning sickness and can be made at home easily with ingredients that are pregnancy safe. They are one way you can introduce more sodium to your diet.

Steak is a good source of zinc, sodium and potassium and they contain very large amounts of vitamin B, mainly B6 and B12, which are all nutrients said to support mothers to conceive a baby boy. However, steak is an acidic food regardless of how it is cooked and should be eaten in moderation.

It is not recommended that you change your diet drastically with the hope of conceiving a baby of a particular gender. If you do try out the baby boy diet, remember to re-adjust your diet once you have conceived, so that you can grow your baby in a more balanced, optimum condition. 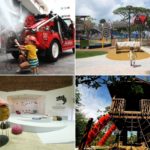 Free Things to Do with kids on Weekends in Singapore