Eyebrow Embroidery: Here’s What You Need to Know Eyebrows help to frame the face. Well-groomed eyebrows can complement your facial features.

Typically, eyebrow grooming is done by tweezing or threading the hairs. The downside of it is that there is a risk of overplucking, and the hair may not always regrow. For people with sparse eyebrows, they have to spend time using an eyebrow pencil to draw their eyebrows.

An alternative known as eyebrow embroidery has been steadily gaining popularity among those who prefer results that last longer. If taken care of properly, results can last up to two years.

What is Eyebrow Embroidery

Eyebrow embroidery in Singapore is considered as semi-permanent makeup. Not to be confused with eyebrow tattooing where ink is injected into the dermis, eyebrow embroidery uses fine strokes in the direction of hair growth to create a full brow look. The process takes about one to two hours and is generally painless after the application of a numbing cream.

How Eyebrow Embroidery in Singapore is Done

Here’s what you can expect to take place when you decide to have eyebrow embroidery done:

1. An eyebrow technician studies the shape of your eyebrows and suggests a suitable brow shape. You can show sample photos to give the beautician an idea of what you’re looking for.

2. The brow shape is drawn on using an eyebrow pencil. The angle or length is adjusted according to your liking.

3. Before the procedure, a numbing cream is applied and left on for 15 minutes. An appropriate eyebrow colour will be chosen based on your current eyebrow colour, hair colour and skin tone.

4. The technician adds colour to the skin with the use of a sterile tool that resembles a scalpel with three needles.

5. After two weeks to a month after the procedure, there will be a touch-up session as the colour usually fades.

Types of Eyebrow Embroidery in Singapore

There are many names for the types of eyebrow embroidery in Singapore that are commonly sought after. However, the procedure is largely similar.

This method creates softer brows that mimic shaded eyebrows by using pointer needles to create microdots around the eyebrow areas. The ends of the brows are darker and fade into a lighter shade toward the beginning of the brow, giving rise to its name “gradient”. This style is suitable for women with little eyebrow hair.

One of the most advanced types of eyebrow embroidery, microblading tries to mimic your real eyebrows as closely as possible. Tiny needles are positioned into a slim blade to implant feather-like strokes on the epidermis. This style suits women with fuller brows.

As suggested, microshading is a type of eyebrow embroidery that combines the stroking technique of microblading with shading for the appearance of full-powdered eyebrows. It lasts longer than microblading due to the shading effect. This style is best suited to ladies with fine or sparse eyebrow hair and want fuller eyebrows.

As it is a minimally invasive procedure involving your skin, be sure to go to a recognised licenced brow salon that practises proper hygiene.

After eyebrow embroidery, taking care of your eyebrows will aid in the healing process for the touch-up session.

1. Do not let your eyebrows come in contact with water

Small scabs will form as part of the healing process. While it can be tempting to peel them, you risk getting an infection as germs from under your fingernails may enter the wounds.

Be sure to apply aftercare cream a few times a day until the wounds are fully healed.

Skincare products and make-up can be absorbed into your wounds and interfere with healing. As such, try to avoid applying any product near your eyebrows.

Read also: 5 Ways Scrapbooking Preserved the Memories of My Children as They Grow

All in all, eyebrow embroidery is a minimally invasive method to cut down on the time needed for makeup, especially during the morning rush. With its natural appearance, it will look like you are already blessed with full and dark eyebrows. 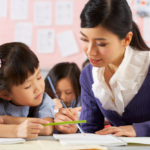 Primary 1 Preparatory Classes: What do they cover?