“My Child Talks to Herself. Should I Be Worried?” It can be alarming for parents when they see their child talking to themselves in the mirror or while playing with their toys. They may feel uneasy and worry if this is normal behaviour for their young child.

But according to child psychologists, this kind of “self-talk” is common for young kids and should not be judged as being weird or negative in any way. In fact, when your child talks to herself, this is a critical childhood development in communication skills.

Children begin talking to themselves by cooing in their crib. This “crib talk” can grow into animated conversations with dolls and toys by the time they are toddlers or conversations with imaginary friends when they are preschoolers. This “self-talk” phase with imaginary friends usually peaks between three to five years old, but can persist longer.

Why does your child talk to him/herself?

Self-talk in children is an essential cognitive development that supports the way they relate and communicate with people around them.

“Children are exploring the world and exercising language, much in the same way that toddlers exercise walking,” says Ester Cole, a Toronto psychologist. “This is their role-playing; they’re exploring relationships and they’re also guiding themselves as they do certain things.”

Children talk to their imaginary friends or their toys as a way to identify their perception of the roles they play in the world. This also helps to bolster their confidence as they tackle their experiences in the world at large.

Cole says that this is the way your kids are narrating experiences they had during the day or projecting their feelings onto their stuffed animals. So you might hear them say things like, ‘Don’t feel scared of the dark,’ or ‘It’s OK, I’m going to hug you.’

According to a study (2008) done by Adam Winsler, an associate professor of psychology at George Mason University on preschoolers who talk to themselves, 5-year-olds do better on motor tasks when they talk to themselves out loud (either spontaneously or when told to do so by an adult) than when they are silent.

Read also: Depression in Children: What It Is and How You Can Help

Should you be worried about your kids’ imaginary friends?

While there is no clear indication that self-talk is more prevalent in boys or girls, the act of talking to oneself is regarded as “strange” in Asia as we tend to associate speaking out loud to no one in particular as a sign of mental illness.

However, there is a growing body of research to indicate that self-talk can help memory recall, confidence, focus and more. One of them is a 2014 paper released by Ethan Kross, an associate professor of psychology and director of the Emotion and Self-Control Laboratory at the University of Michigan.​ His paper shared that self-talk can make us feel better about ourselves and even instil confidence that can help us get through tough challenges.

The next time you see your pre-schooler talking to him/herself, don’t worry. Studies show the following benefits that self-talking can yield:

The only time you should be concerned is when your child keeps repeating the same sentence or indulges in self-talk to calm himself when he is upset. This could be the onset of autism in young children. Do not form your own assumptions just yet though – consult a doctor to determine if your child is autistic or not.

So, if you happen to catch your child chatting with his/her imaginary friends, you can rest assured and sit back, enjoy the self-talk and listen in as your child relays his/her version of the world to you. 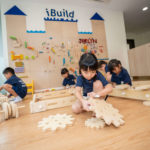 At This Preschool, Children Pick up Skills for the Future Through Play!